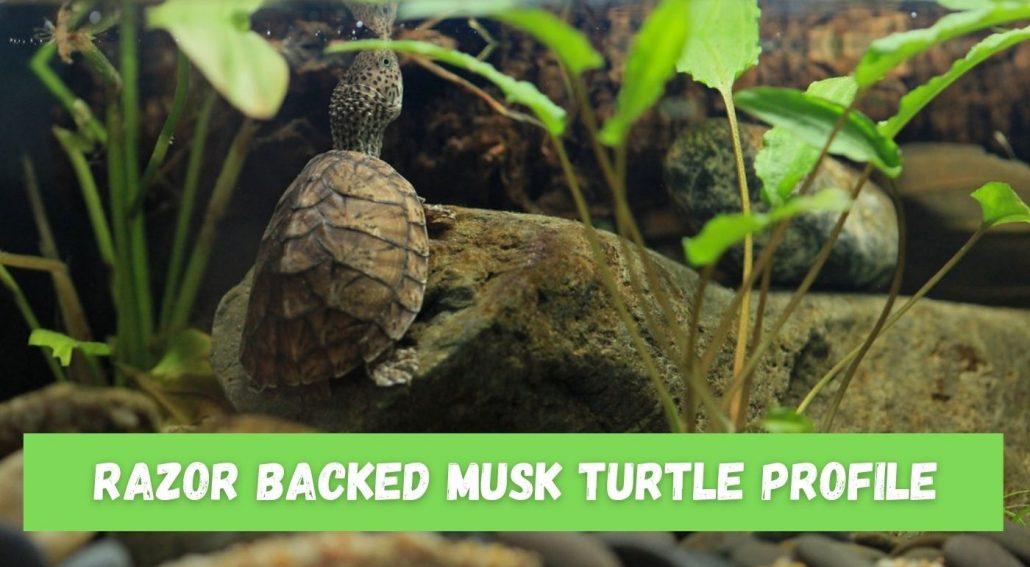 Razor Backed Musk Turtles are found primarily in the Southern United States between Texas and Florida. In the wild, they primarily live in slow-moving bodies of water, including ponds, rivers, and even swamps.

Razor Backed Musk Turtles typically have a brownish carapace, with black marks along their scutes. Their skin is a light gray color with black marks spread across. Like other musk turtles, they have a sharp nose that resembles a beak, and a long neck that helps them catch their prey.

They get their name due to the tall bridge along the top of their shell. While this peak usually flattens out as the turtle gets older, it is prevalent in baby razor backed musk turtles.

The Razor Backed Musk Turtle is one of the largest species of musk turtles. They usually reach an adult length of 6 inches. They have a tail that usually reaches a length of one inch, but the males sometimes have longer tails.

Can you have a Razor Backed Musk Turtle as a pet?

Yes, you can absolutely have a Razor Backed Musk Turtle as a pet. However, it is important that you have the appropriate setup to ensure that your turtle has a healthy habitat.

What sort of tank do you need for a Razor Backed Musk Turtle?

Razor Backed Musk Turtles are a very aquatic species. In fact, in the wild they spend the majority of their time swimming in the water. It is also common for them to walk around on the bottom underwater. For this reason, it is essential that you have a large turtle tank to accommodate for their swimming.

What else should you put in your tank?

Since Razor Backed Musk Turtles are used to living in highly vegetated habitats, I would suggest putting some plants in your tank. This will help mimic their natural habitat, and it will give them some places to hide around.

Since they spend so much time in the water, it is very important that you have a high powered filter in your tank to keep the water clean. If you need some tips on filters, check out my article on the best filter for turtles.

What do you feed a Razor Backed Musk Turtle?

If you want to encourage your turtle to exercise, you could also feed it some small feeder fish. To learn more, check out my article on feeder fish for turtles.

In the wild, Razor Backed Musk Turtles usually don’t bask that much. However, I still strongly recommend that you give your turtle a spot to bask in case they want to. It doesn’t have to be that big, just a small area where they can climb out of the water and get access to UVA and UVB light.

Can they live with other turtles?

In the wild, they usually live for between 20 and 30 years. However, if cared for properly, they have been known to live up to 50 years in captivity.

You can pick up a Razor Backed Musk Turtle, but it is important that you move your hand slowly so that you don’t startle your turtle. While it is uncommon, these turtles do sometimes bite if they are scared. They make different sounds when handled as well – a kind of chirp or squeak that is both endearing and amusing at the same time.

Where can you buy Razor Backed Musk Turtles?

You can buy Razor Backed Musk Turtles online from myturtlestore.com. At the time of this writing, you can buy one for only $50. While they are a little more expensive than the common red eared slider or painted turtle, they are great pets and very fun to observe when they swim.