If you have a pet turtle that should be in the water but instead stays out of it, something is wrong. Here’s how to fix the problem.

Do All Turtles Need Water?

Not every type of turtle needs a lot of water.

Certain species of pet turtles need to live in aquariums or tubs filled with as much water as possible. Below is a list of the most common aquatic pet turtle species:

If you have any of these kinds of turtles, you’ll need a larger aquarium or tub filled with lots of water. The more water, the better.

Generally, the only time they aren’t in the water is when they are basking.

But what if your turtle just won’t go in the water?

Let’s get straight to it.

Why Is My Turtle Staying Out Of The Water?

The two most common reasons an aquatic turtle such as a red-eared slider won’t go into the water is because the water temperature is too low, water is unbalanced, or your turtle is sick.

Other possible reasons are:

If you suspect the water in the tank is unbalanced, you should check out some of the products below: 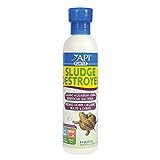 Turtle Tank Sludge Destroyer
This solution can help balance the bacteria in your fish tank water. It also helps break down waste.
$10.99 −$5.34 $5.65

A turtle might stay out of water because of a respiratory infection, as the turtle below.

Next, we need to determine whether or not your turtle actually has a problem.

If you were to check up on your turtle every two hours or so throughout the day, I would estimate that a healthy turtle should be found in the water about half the time.

Mind you, I am totally basing this off my own experience. But, I am constantly checking up on my slider and painted turtle multiple times per day. Most of the time, one of them is in the water.

Take a day and do just that. Check up on your turtle every 2 hours. Where is it? Is it in the water, or is it basking or outside of the water?

If just about every single time you checked on the little guy or gal and it wasn’t in the water, that’s a surefire sign of a problem.

Now, how do you solve this problem?

By first figuring out the reason why your turtle isn’t going into the water.

Let’s get the easy stuff out of the way first.

The vast majority of common pet turtle species don’t like to swim in water that is too cold or too hot.

A good water temperature range for the majority of aquatic turtle species is going to be from 75 to 85 degrees or so, give or take. Dropping below 70 is going to make the temperature too cold, and above 90, too hot. 75 to 85 is usually the sweet spot.

Because turtles are endothermic and their body temperature increases or decreases based on their outside environment, a turtle swimming around in water that is at 55 degrees is going to be one very sluggish, slow, lethargic turtle.

If your tank water is too cold, your turtle will likely not enter it. Water that is too cold can lead to respiratory illnesses and more.

Likewise, if your tank water is too hot, this could also be uncomfortable for your turtle.

In my experience, if an owner has a problem with the temperature, it’s usually the water being too cold rather than hot.

Whatever the case may be, I would recommend this be the first thing that you check. My favorite water heater is the Titanium Tube Water Heater. It can heat anywhere between 60-120 gallons of water, which is perfect if you have an aquatic turtle with a big tank.

How To Know If Your Turtle Is Sick

If your water temperature isn’t too hot or too cold, and your turtle refuses to enter the water, the next most likely reason is an illness.

When sick, turtles bask a lot more. They do this to raise their body temperature and “cook” away any illness that they have.

How can you tell if your turtle is sick?

You’ll need to play a bit of doctor and look for symptoms of an illness.

Look for these symptoms:

If your turtle exhibits any of these symptoms, illness is likely.

Logically, the next question then becomes, which illness?

What Is Wrong With My Turtle?

In my experience, a turtle that is constantly basking and retracted into its shell is probably experiencing a respiratory infection.

This becomes even more likely if your water temperature has been found to be too cold.

Respiratory infections tend to occur in turtles during the colder months but they aren’t limited to them. They can also crop up if the temperature of the room that houses them is set too low as well.

What I would recommend is to have a brief look at this article I wrote regarding symptoms and treatments of 6 common diseases in turtles, especially the part concerning respiratory infections. See if any of that applies to your turtle.

Follow the advice and treatments given, and hopefully, you will have found the reason your turtle doesn’t go into the water.

Why Else Is My Turtle Not Going In The Water?

Now, what if your water temperature is on point and your turtle isn’t exhibiting any signs of illness?

What should you do now?

In a small minority of cases, there can be other possible reasons.

Of the myriad of other possible causes, the 2 that are next most likely are, in my opinion:

Turtles, relative to a lot of other water animals such as fish, are much more resilient towards poor water quality. A turtle can sometimes live in extremely filthy, very bad water for quite sometime before its health starts to decline, whereas fish, in general, will not last very long in those same conditions.

That being said, poor water quality can still affect the health and well-being of your turtles, and if something is off, it could lead to your turtle wanting to stay outside of it rather than in.

Now, there can quite a few possible issues with your water quality, but the 2 most likely issues are:

Can Turtles Live In Tap Water?

Turtles can live in tap water, but you may need to treat it first.

This is because there is a possibility that it contains a bit of chlorine. For humans, this can be beneficial, but for turtles, it can irritate their eyes.

Now, I want to be clear here that tap water that contains chlorine is not going to kill or injure your turtle. It’s possible however that the chlorine is simply irritating your turtles’ eyes to an extent that is too uncomfortable to enter the water.

How To Make Tap Water Safe For Turtles

You can completely remove this possibility by simply using a water-conditioner.

The easiest way to treat turtle tank water is with this $3 water conditioner.

This will not only eliminate chlorine but also eliminate ammonia build-up.

If your tank does not have a healthy bacteria culture, ammonia can slowly build-up and make the water toxic to your turtle.

What often happens in aquariums that are filled with untreated tap water is that the chlorine reduces or kills healthy bacteria and ammonia builds-up too quickly.

Why Healthy Bacteria Is Healthy For Turtles

Your turtle poops and it breaks down into ammonia. If you have a healthy bacteria culture established in your tank (through good maintenance as well as biological filtration), it will break down into nitrites, which will then break down into nitrates. Nitrates are much less harmful to turtles and can be controlled by regular water changes.

A tank without good bacteria is a tank that does not produce a healthy nitrogen cycle.

If you suspect your water’s ammonia level is too high, here’s what you can do:

The other possibility is that one or a few of your turtles are being bullied when they are in the water by another turtle that you have. This often happens when you house multiple turtles together.

The best way to reduce or prevent turtle bullying is by getting the largest aquarium or tub you can. The more space you have the less turtles will be aggressive.

If you have multiple turtles in the same tank, and one of them is refusing to enter the water, try separating them, and see if this changes its behavior.

If none of these actions are applicable to you, then I would suggest something drastic.

Put your turtle into something else, give it a basking spot as well as water and see what it does. Does it still stay out of the water, or does it swim?

If it still refuses to enter the water, this suggests something else entirely, something else serious. If that is the case, the best course of action is to simply see a vet (particularly a vet that specializes in reptiles) for study and possible medication and treatment options.

Hopefully, it doesn’t come down to this.

How to Remove Trim from Aquarium