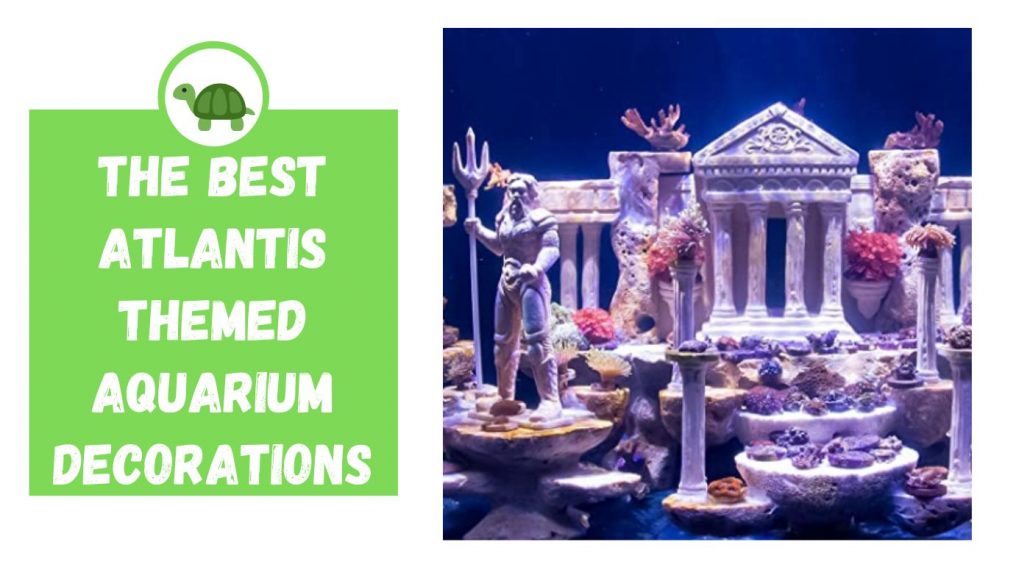 While there is still no concrete evidence that Atlantis actually existed, it is still one of the most popular mythical cities of all time. First mentioned in text by the Greek philosopher Plato, Atlantis has long been represented in literary works and popular culture. Today’s article will focus on the best Atlantis themed aquarium decorations.

The best Atlantis themed aquarium decorations are ancient Greek ruins, statues, and plants. I also suggest that you get a sand substrate.

Since Plato described Atlantis as a strong, Greek civilization, ancient ruins are a great idea for any Atlantis themed aquariums. They greatly add to the mysterious yet eloquent aesthetic. They also do a great job of turning the clock back and portraying the past.

Below are some pictures of some of my favorite Atlantis themed aquarium decorations. They are all available for purchase on amazon. All of these Atlantis decorations cost less than $30.

If you have a larger aquarium, I suggest getting one of these tall ruin decorations. The columns have a height of 11 inches. They have plenty of space between the columns for smaller fish to swim between.

If money isn’t an issue, you should check out this Atlantis aquarium set. While it is definitely a little pricey, it will instantly transform you aquarium into the infamous lost civilization. Below is a picture of the full set.

Greek statues are also a must for your Atlantis themed aquarium. As you probably know, the Ancient Greeks were known for their innovative statues dedicated to their gods.

While they can get a bit pricey, they are a great way to add to the ancient Greek aesthetic. They are also great center pieces for any aquarium. Since Poseidon is king of the sea, I would start by looking at some statues of him.

There are also some smaller, cheaper options for statues. I personally really like this Classic ancient Greek goddess decoration.

While it is only 4 inches tall, it comes with two statues as well as some pillars. It is also very affordable, costing between $30-$40.

Whether you go with real or fake ones, I definitely suggest that you get some kind of plants for your Atlantis aquarium. You can place some of the plants on or over the decorations in order to add to the “hidden” nature of Atlantis.

If you are open to fake plants, I suggest that you check out these green vines. They resemble plants that are found in Greece.

Another cool idea is to add some moss to your aquarium. While it is important to make sure the moss doesn’t grow out of control, it can really help add to the ancient and “lost” aesthetic.

What substrate should you use for an Atlantis aquarium?

Since the lost city of Atlantis is said to be under the sea, I suggest you use a sand substrate. This will really help reinforce the under the sea aesthetic.

It is important to know that all sand is not created equal. While you can take sand from the beach or other area, I suggest you check out my article on the best sand for a tank.

Now, if you have a strong filter or big fish, there is a chance sand will get stirred around to much in your tank. This can cause your turtle tank to get cloudy.

Lastly, you could use soil as your substrate. This would give you the option to grow a small layer of grass along the bottom, which could certainly enhance the aesthetic of your Atlantis themed aquarium.

I hope this article will help you get started in creating your Atlantis themed aquarium. This underwater oasis is a great choice for any aquarium, and good luck bringing the pinnacle of lost civilizations to your aquarium. If you are interested in other ocean themed aquariums, you should check out the best SpongeBob aquarium decorations.