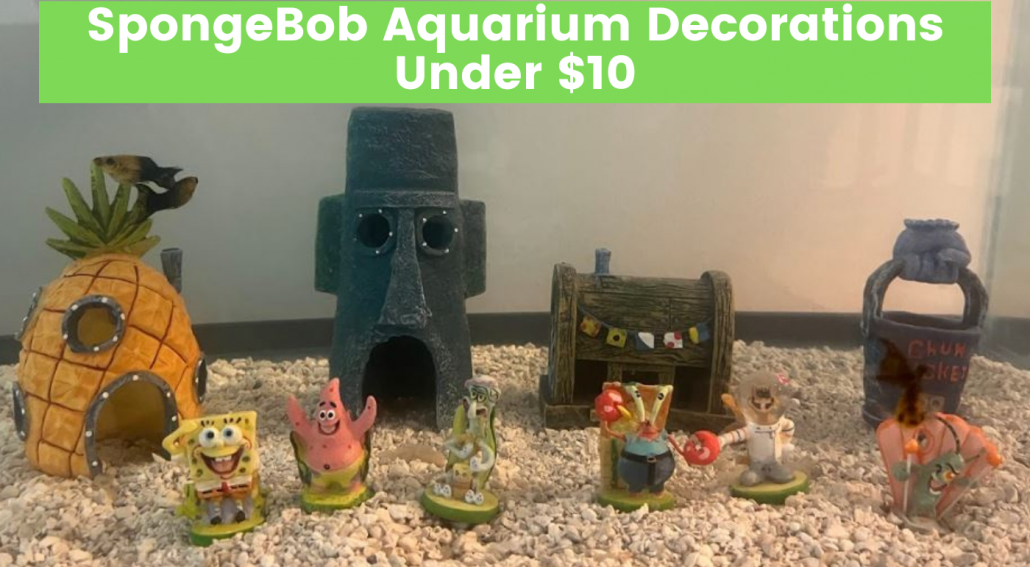 SpongeBob was a staple in many households beginning in the late 90’s and into the 2000s. Since the entire show is based in under the sea in Bikini Bottom, it is no surprise that SpongeBob themed aquariums are becoming so popular. This article is dedicated to choosing the best SpongeBob aquarium decorations.

The best SpongeBob aquarium decorations are the 6-piece character set, the homes and restaurants, and a crushed coral substrate.

This set is an absolute must for your SpongeBob themed aquarium. It comes with the 6 main characters from the show, including SpongeBob, Patrick, Sandy, Mr. Krabs, Squidward, and Plankton.

The characters have a height of around 2 inches. Each one has a round circular base at the bottom, which gives the ornament a lot of stability. If you have a high powered filter, you can dig the base into the substrate to ensure they don’t fall over.

The ornaments are painted with great detail, giving them a nice realistic touch. They are made of resin which is safe for all fish tanks, and the ornaments are easy to clean. Just to be safe, I suggest that you rinse these ornaments in warm water before you put them in your tank.

A SpongeBob Squarepants aquarium is not complete without all of the iconic locations from the show. While there are a couple sets you can buy online, it is actually cheaper if you buy each place individually. I decided to get Squidward’s house, the Krusty Krab, the Chumbucket, and Spongebob’s pineapple house.

The houses are perfect, especially if you have smaller fish. The houses have openings at the door which allow small fish to swim inside to explore and hide. The Squidward house is almost 7 inches tall, which is enough room for multiple fish to swim around.

I was able to purchase each of the houses when they were on sale for only $6 each. I think they are usually around $10, so four of them will cost around $40. While it does seem a little pricey, these structures are made from a high quality resin which will last long.

They are also painted with great detail, and look very realistic. They all naturally sink to the bottom so you don’t have to worry about them getting pushed around by your filter. If you get the character set, you can put each character in front of their home. While there isn’t a specific ornament for Patricks house, you can either use a coconut, or a large round rock.

Below is a picture with the characters and the popular show locations. The pineapple is not pictured because it showed up a day later and I was too excited to wait.

Now, after seeing this photo, you are probably wondering what the best substrate is for you SpongeBob aquarium.

For a substrate, I suggest that you used a crushed coral substrate. It gives you the aesthetic of the ocean, and it pretty easy to maintain. All you have to do is wash the crushed coral before you put it in your tank. This will get rid of most of the dust. My aquarium was a bit cloudy when I first put it in, but the water cleared up a lot after running my filter for 24 hours.

Crushed coral is also good for your fish tank because it provides beneficial vitamins and minerals to the water. It is also a good substrate if you want live plants in your aquarium.

While sand could be a good option for your SpongeBob aquarium, there are some important things you should be aware of. For starters, sand is usually much more dusty than coral, so it can take up to a day to clean it before you can put it into your tank.

Also, if you have a high powered filter, or large fish or turtles in your aquarium, it can cause the sand to get pushed around and greatly reduce the visibility of your tank. Through personal experience, I have also found that plants grow much better in coral versus sand. If you are set on using sand, you should check out my article on the best beach themed aquarium decorations.

Other options for your SpongeBob aquarium decor

While the decorations mentioned above were the ones I decided on, there are still plenty of other SpongeBob aquarium ornaments that are worth considering.

If you have a large aquarium, you can help fill it up with these Bikini Bottom homes. However, it is important to know that these houses are only 3 inches tall, so they would fit better behind some other ornaments.

The Bikini Bottom bus is another great ornament if you want to add on to your SpongeBob aquarium. The bus is 5 inches long and 2 inches tall. It usually sells on amazon for around $12.

This SpongeBob background is the perfect backdrop for your aquarium. It has the same background as Bikini bottom, which will certainly give your aquarium a realistic touch. Just make sure that you order the right dimension for your tank.

Also, make sure to thoroughly clean the glass of your aquarium before you attach the background.

If you want some plants for your SpongeBob aquarium, I suggest this kit from amazon. It comes with 15 different plants that range in height from 2 to 9 inches. The plants are very bright colored, which will definitely make your aquarium more vibrant.