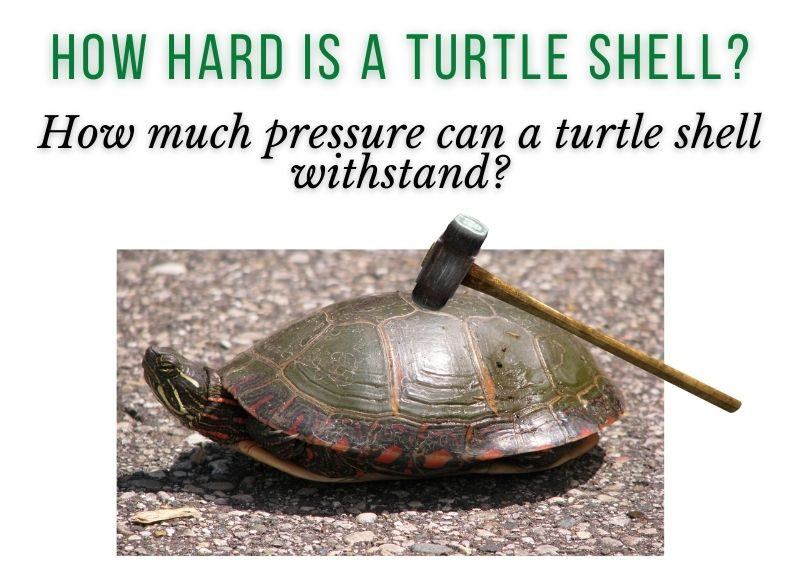 A turtle’s shell is one of the more unique evolutionary traits when it comes to reptiles. Formed over millions of years, the shell provides an excellent defense mechanism against predators. Since turtles generally lack speed and agility, their shells are a very important defense mechanism that keeps them alive. In today’s article, we are going to discuss everything you need to know about the turtle’s shell, and how hard it really is.

What material is a turtle’s shell made of?

Can a turtle leave its shell?

No. A turtle is unable to leave its shell because the shell is connected to their spinal cord and rib cage. Unlike other sea animals with shells, the shell of a turtle is more of an extension of their body instead of a “temporary home.” An empty turtle shell usually means that the turtle was eaten by a predator. As the shell is very hard and provides very little nutritional value, predators usually only eat the body of the shell and leave the shell untouched.

How hard is a turtle shell?

Which animals can eat turtles?

Now you are probably wondering what animals are able to crack a turtle’s shell.

For land turtles, the biggest threat are alligators and crocodiles. Both these animals have jaws that can crush a turtle’s shell. An alligator’s jaw can apply 2,980 psi [pounds per square inch], while a crocodile’s jaw can apply  5,000 psi. While alligators and crocodiles can eat turtles if they want to, they can sometimes befriend turtles. This is because they don’t like the taste of the turtle’s shell, which is very bony and low in nutritional value. This is why you will often see turtles swimming near alligators or crocodiles without a worry.

When it comes to sea turtles, the main animals that can break a turtle’s shell are whales and sharks. Tiger sharks are a common predator of sea turtles, and killer whales frequently eat leatherback turtles. Sea turtle’s tend to have softer shells because their shells must be more flexible underwater.

Why are birds on the list? How in the world do birds crack a turtle shell? Well, birds are able to crack a turtle shell based on their ingenuity, and not because of their jaw strength. It is not uncommon for birds to pick up a turtle and carry it to a very high altitude. They then drop the turtle, which usually results in the shell cracking upon impact with the earth. There are a couple videos of this which you can find on youtube.

There are also a bunch of animals that frequently eat turtle’s eggs and hatchlings. These animals include birds, raccoons, foxes, crabs, and dogs. For this reason, only 10% of turtle eggs survive.

Should you pet your turtle’s shell?

Petting a turtle’s shell is a controversial topic. Some people believe it is an invasion of privacy and nuisance for the turtles, while others believe turtles think petting feels good. There are a lot of videos on the internet that show a happy turtle being pet by their owner. A turtle does have some feeling in their shell.

If you want to pet your turtle, the key is to start soft and read your turtle’s body language. If you start petting your turtle and they immediately put their arms or head back in their shell, they most likely feel uncomfortable. This is also the case if your turtle starts to walk away from you when you start petting them. On the other side, there is a chance your turtle really enjoys the petting. In this case, they will probably keep inching closer and closer to your hand.

Where Can I Buy a Diamondback Terrapin?

Can Turtles be Gay?

Which Turtle has an Orange Belly?