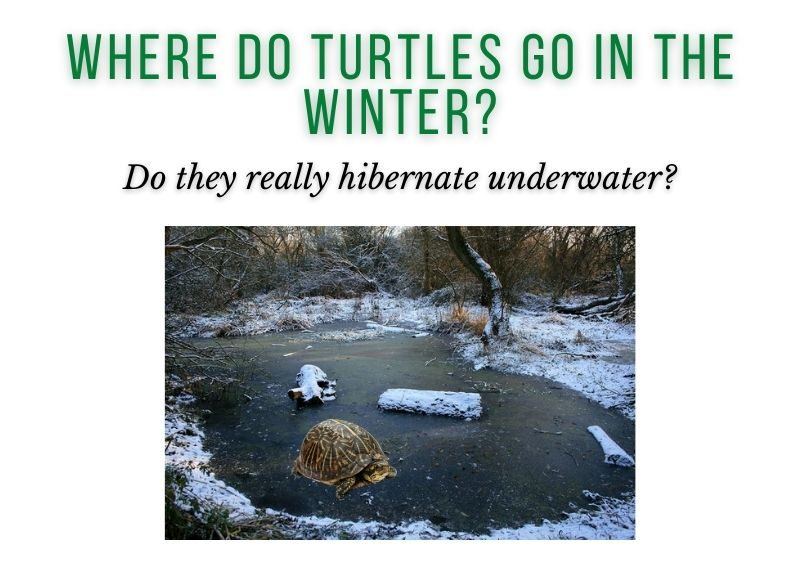 As amphibians, turtles are one of the few species of vertebrates that are able to survive on both land and water. I get asked many questions about this topic, such as how turtles swim or  how turtles breathe underwater. One question I am frequently asked is what do turtles do in the winter? Do they hibernate? Do they stay in the water or on land? How do they survive cold temperatures? In today’s article, I will answer all of these great questions.

Where do turtles go in the winter?

Most turtles go underwater in the winter. That’s right, they can spend over 100 days underwater. Turtles usually swim to the bottom of the pond or river under the frozen surface.

How do turtles breathe underwater?

Now you are probably wondering how turtles are able to breathe underwater. The usual answer is that they can’t, and they must rise to the surface to get oxygen from the air. However, when a turtle spends the winter underwater, they go through a process called brumation. During brumation, the turtle is able to extract oxygen from the water through their blood vessels. Interestingly enough, the largest concentration of blood vessels on a turtle’s body is on their butt. The official term for this type of oxygen collection is called cloacal respiration. While blood vessels intake significantly less oxygen compared to the lungs, it is still enough to help the turtle survive months under water.

This is because a turtle that is underwater in brumation has a much slower metabolism. Their heart rate also slows down tremendously. This is due to the cold water temperature, as well as the low level of movement. When a turtle has a low metabolism, they require much less energy and oxygen.

Technically speaking, turtles do not hibernate. Instead, they go through a process called brumation.

Brumation refers to a slow, sluggish period of low activity that turtle’s go through in the winter underwater. Brumation is similar to a deep sleep, but the turtle might still move around a little. This process is similar to hibernation for warm blooded animals, but brumation usually involves limited movement and is only exhibited among cold blooded animals. Brumation is also common among snakes and lizards.

How do turtles know when to wake up?

While the majority of the turtle’s body is in a sleep-like state during the winter, not everything is shut down. The turtle’s body is still sensitive to changes in their environment. One of their main senses that signals spring has arrived is their eyes. Turtles can still sense a change in light even though their eyes are closed. When the ice surface melts, the bottom of the pond or river usually becomes much brighter. This signals the turtle to leave its brumation state.

Towards the end of winter, the movement in the water usually increases. The turtle is able to sense this change through their nervous system, and signals to the turtle to wake up.

What happens when the turtle reaches the surface?

Once the turtle reaches the surface, they begin breathing again through their lungs. Their body is typically pretty weak due to the low level of oxygen. Their body also feels up with lactic acid while they hibernate in the winter. This is similar to when humans have a lactic acid build up in our muscles, and we develop cramps. Luckily, the turtle is able to neutralize the lactic acid in their body with the calcium and carbonates from their shell. When turtles come to the surface after winter, one of the first things they do is bask. Turtles bask in order to increase their body temperature and expose their shell to UV rays.

Do all turtles hibernate underwater?

How cold can turtles survive?

Theoretically, turtles can survive a temperature as long as it is above freezing. However, when turtles are in very low temperatures, their body usually loses a lot of mobility. With decreased mobility, the turtle is unable to find food and perform other important procedures. Therefore, turtles can’t survive low temperatures for an extended period of time.