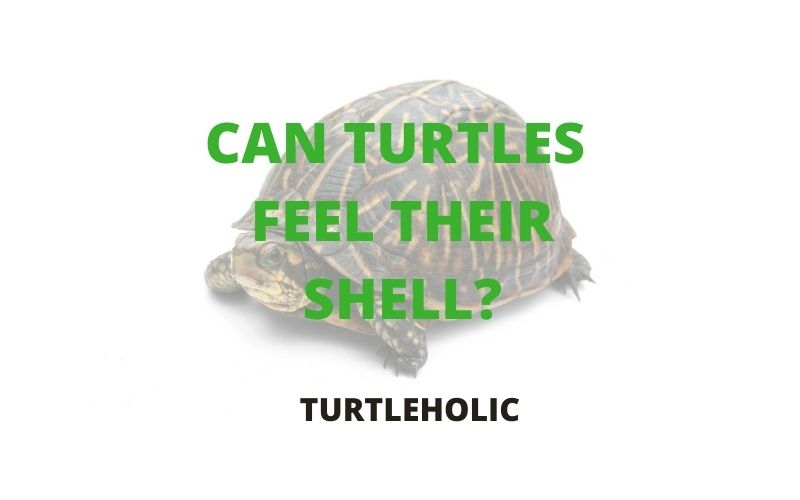 Most people would agree that the shell is the most unique component of a turtle’s body. The majority of questions asked by our readers have to do with the shell and its origin and function. In today’s article, we are going to discuss if turtles can feel their shell, as well as how turtles came to having shells in the first place.

Can turtles feel their shell?

In short, yes, turtles can feel their shell. This is because their shell does contain nerve endings. However, the nerve endings on their shells are not very sensitive, and generally just transmit vibrations. The shell of a turtle is similar to the material that makes up the horn on certain animals, as well as human fingernails. Therefore, the sensitivity of a turtle’s shell is like that of your fingernail. You can feel when someone touches it, but its not very sensitive.

Additionally, all turtle shells are not the same. For example, the shells on Leatherback sea turtles are much stronger compared to the shells of other primarily land species.

This is because leatherback sea turtles dive to depths of up to 2,500 feet to search for food. Therefore, their shells must be strong enough in order to withstand the pressure of the water at that depth.

Although sea turtles’ shells are stronger, they are typically more sensitive than land turtles. This is because sea turtles usually have a thin layer of skin on the outside of their shell. This is to make the shell more flexible so the turtle can swim through smaller areas.

Can turtles feel through their shell

It depends on the amount of pressure, but turtles can usually feel through their shell. While the outer bones on the shell are not very sensitive, the skin underneath their shell is very sensitive and will likely pick up any sort of sensation.

How did turtles develop shells?

Thanks to archaeology, scientists have a pretty good idea as to how the turtle evolved to develop an outer shell. The most widely accepted theory is that the shell started to form when extensions of the turtle’s back bone and ribs began to merge and grow together. Eventually, this bone formation began to grow on the outside of the turtle’s skin.

Most people are not aware that the formation of the shell on the turtle took millions of years to complete. That means that there were species of “pre-turtles” that had partially grown shells that did not completely cover their body.

This is supported by the findings of “half shelled” turtles in China that date back to over 250 million years ago. The oldest fossil of a full shelled turtle was found in Germany, and dates back to 214 million years ago. Today, turtles are the only species of reptiles with a backbone that also have a shell.

The formation of the shell was extremely beneficial for the turtle species. While it did slightly slow down their mobility, it provided great protection for the turtle’s vital organs.

Some species of turtles are even able to squeeze their legs and entire head into their shell so that they are essentially indestructible. The shell protects the turtle from most predators, as their shells are usually stronger than the teeth of their predators.

Do tortoise shells have nerve endings?

What is the shell of a turtle made of?

The shell of a turtle is made up of around 60 small bones that have an outer shield called “scutes.” Scutes are the outer squares that are visible on a turtle’s shell. Scutes are primarily made up of keratin, which is the same material that our fingernails are made of.

The shell of a turtle is categorized into two sections: the top portion (which is referred to as the carapace), and the bottom portion under the turtle’s body (known as the plastron). The portion of the shell that merges these two sections together is called the bridge.

Check out our article on shell peeling if you are interested in why turtle shells peel?

How to Preserve a Turtle Shell