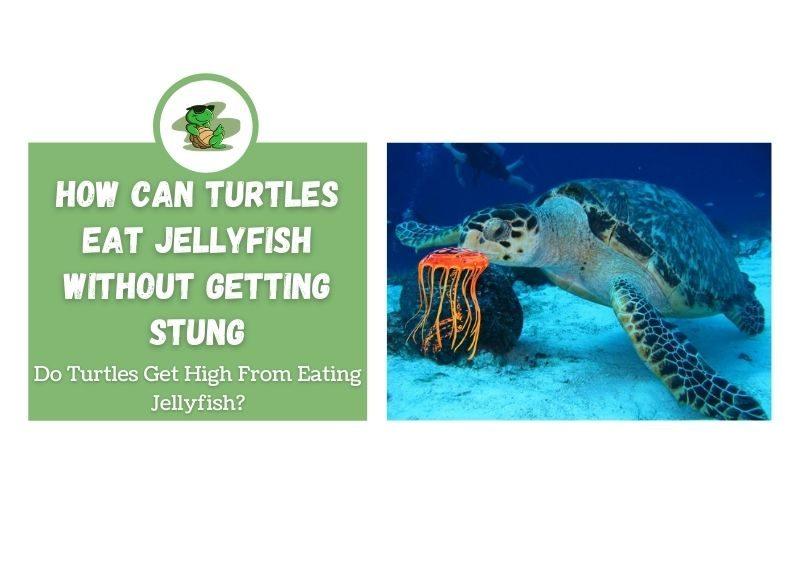 There is a post floating around on IMGUR that claims sea turtles can get high from eating jellyfish. The origins of this theory is a blast back to your childhood – Find Nemo. The post claims that Crush was “high” throughout the film due to chemicals in the jellyfish that he eats.

So let’s set the record straight.

Yes, turtles do eat jellyfish very frequently in the wild. In fact, jellyfish are the main food for the infamous leatherback sea turtle. Similar to turtles that live on land, sea turtles will eat anything they can get their mouth on, and jellyfish are one of the easier animals to catch in the ocean.

Can turtles get high from eating jellyfish?

Quite simply, no! This is an internet rumor, and it will remain just that. It is true that jellyfish make up a large part of a turtle’s diet, but there is nothing about the chemical makeup that intoxicates the turtle. In Finding Nemo, Crush simply embodies the surfer archetype – chill, carefree, and a daredevil.

We have researched the chemical makeup of jellyfish and talked with many sea turtle experts and no one has been able to find any evidence or research to substantiate this claim. It is important to note that turtles do eat jellyfish, but it has no cognitive effect on them.

So how do turtles eat jellyfish without getting stung?

There are a few evolutionary adaptations that enable turtles to eat jellyfish without being stung. Their main defense mechanisms are:

First, their beaks: Turtles, specifically Leatherbacks have very thick skin around their beaks. This allows them to chomp down without fear of stinging their mouth.

Additionally, their beaks are razor sharp. When they clamp down their lower and upper jaw, they can pierce almost anything. It is safe to say that soft-bodied organisms like jellyfish don’t stand a chance against the turtle’s jaws. In some cases, turtles can attack from the top, immediately separating the jellyfish from its venomous tentacles.

So what in the world is Papillae? As mentioned, an additional adaptation is the papillae which lines their throat to protect them from stings and also helps expel sea water.

Papillae are small spiny growths and provide an armor all the way from the esophagus down to the stomach. It is actually the exact same protein that makes up human fingernails and hair. The thick layer protects the turtle from any potential stings inside their throat or stomach.

The turtle’s shell: It is no secret that turtles have a hardened shell. Their shell protects their body from stings. Turtles do have a small number of nerve endings on their shells, but not enough to make a sting painful.

The blind attack: Their eyes are actually the most sensitive part of their body. A sting to the eyeball could be quite painful to a turtle. Luckily, they have learned to attack with their eyes shut. Protecting their eye sockets from any painful sting. If you ever watch a video of a turtle attacking a jellyfish, you will see it close their eyes right before the attack. This strategy greatly reduces their danger of being injured.

It is actually quite important that turtles have these adaptations that allow them to eat jellyfish. Although jellyfish are not particularly nutritious to turtles, turtles play a very important role in controlling the jellyfish population.

Without turtles as predators, jellyfish populations would grow uncontrollably and damage ecosystems.

Plus, who wants more jellyfish hanging around the waters they swim in?

We can all do our part in protecting these ecosystems by picking up trash and ensuring that plastic bags never make their way into the ocean. Turtles often confuse these bags for jellyfish, and the impact can be devastating. Often suffocating and killing the turtle that makes the mistake. In areas where pollution is really bad, the impact has already been noticed, with jellyfish living predator free, destroying the important food chain balance.

We should be grateful that turtles have evolved in such a way. You can now happily watch Finding Nemo and know that Crush is not “high” but rather just a good spirited bro trying to lend a helping fin!

How to Remove Trim from Aquarium