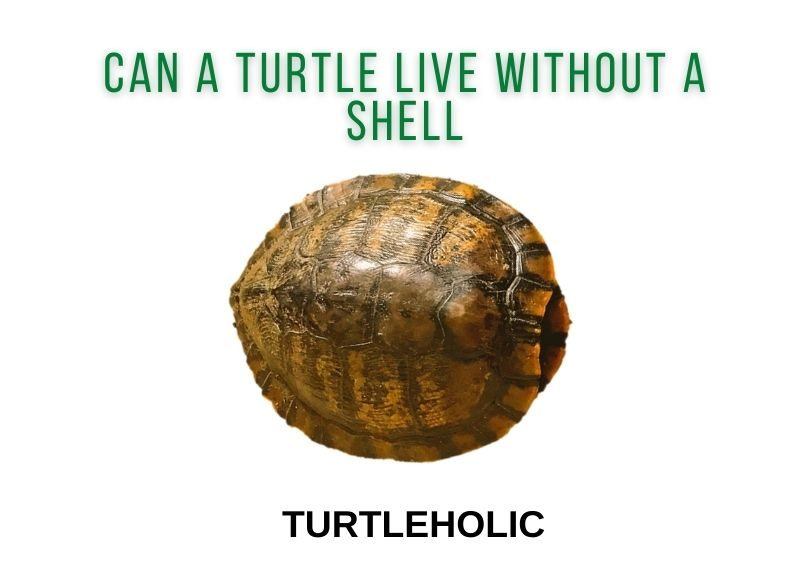 By far, the most distinguishable part of a turtle is their shell.

These two regions are connected to each other on both sides by a region called the bridge. The top region of a turtle’s shell is covered by rows of rectangles by small pieces which are called scoots. The scoots cover the entire top layer of the turtle’s shell. They are made out of a material called keratin, which is the same stuff that your fingernails are made from.

In today’s article, we will discuss if a turtle can live without its shell.

Can a turtle live without a shell?

The simple answer is no, a turtle can not live without a shell. Removing a turtle from its shell would be the equivalent of removing a human’s spine and rib cage. While they might be able to temporarily survive for a couple minutes, their body would have absolutely no structure. The turtle would be unable to move at all.

How are turtles attached to their shells?

Most people think a turtle’s shell is simply just a protective shield that serves as a home for the turtle to live in. They think turtles have the ability to crawl out of their shell, but this is not the case.

Turtles are attached to their shells because their rib cages and spine are fused together with the top layer of the shell. This fusion occurred over millions of years of evolution. The main reason turtles formed shells was because it protected their vital organs such as their heart and lungs. The bottom part of the turtle’s shell (plastron) is also connected to the turtle’s skeletal system. These bones are essentially the turtle’s sternum and clavicle.

Baby turtles are born with small shells, which eventually grow as the rest of the turtle’s body also grows. Since a turtle’s shell is mostly made out of bone, it is important for turtles to consume high levels of calcium and vitamin D so that the shell grows properly.

If a turtle does not consume enough calcium or vitamin D, their shell will not grow properly. This can cause a lot of health complications.

Can turtles leave their shells?

It would be impossible for someone to take a turtle out of a shell since it is attached to the body. You would have to to detach their rib cage and spine bones.

What does the inside of a turtle shell look like?

Below is a picture of what the inside of a turtle shell looks like. As you can see, the turtle’s rib cage and spine are attached to the shell.

Could a turtle live with only the top part of its shell?

Since the turtle’s rib cage and spine are connected to the top part of their shell, there is no way they could ever survive being detached from their top shell. However, many people have asked us whether or not a turtle could survive without the bottom half of their shell.

Theoretically, a turtle could survive without the bottom shell. However, there is no way the turtle would be able to survive in the wild. A turtle that is missing the bottom part of their shell would be unable to move.

They would be a sitting duck to any predator that was on the hunt for food. Additionally, the turtle’s entire bottom half of their body would be exposed, meaning there is nothing protecting their internal organs. Therefore, a turtle cannot survive if they are missing any part of their shell.

Now if you have ever found an empty turtle shell, you probably have a lot of questions. How did the turtle leave the shell, did they find a new one? All of these questions can be answered with the simple explanation: the turtle has died.

As we have reiterated throughout this article, there is absolutely no way for a turtle to live without its shell. If you ever found an empty turtle shell, it means that the turtle it belongs to is 100% dead. If you look inside the shell, you should be able to see the bones and rib structure of the turtle still attached to the shell.

The reason the turtle shell is empty is because the turtle’s body has probably already decomposed. Since the shell is made out of bone, it takes a lot longer to decompose. There are some turtle shell fossils that exist from millions of years ago.

Alternatively, a predator might have been able to fit their claws or mouth inside to eat the turtle’s body. As you would expect, the shell of a turtle is not very tasty for a predator. For this reason, the predator will almost always leave the shell behind. Oftentimes, an empty turtle shell is pretty clean because the shell has been washed around by a nearby river.

If you are still interested in learning more about shells, check out this article that explains if a turtle can feel their shell.

How to Preserve a Turtle Shell