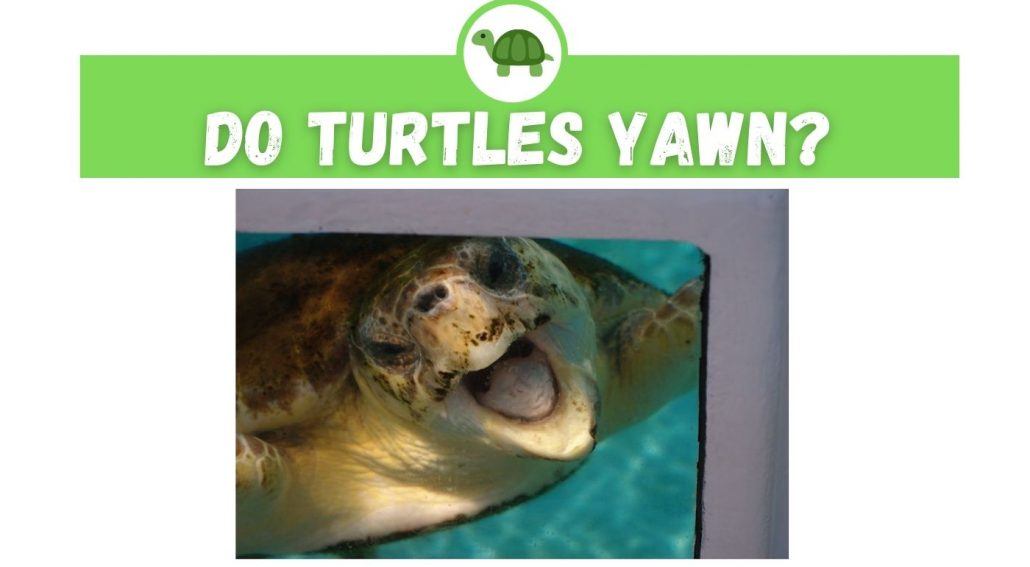 Have you ever seen your turtle yawning? Maybe they were underwater or sitting under their basking light. You probably saw them open their mouth, and wondered to yourself, is that a yawn? You might also be worried if your turtle yawns a lot. In today’s article, we will cover everything you need to know about this behavior.

For starters, yes, most species of turtles do yawn.

Scientists have revealed that turtles do yawn as a way to stretch their mouth muscles and intake more oxygen. While yawning can be a way to intake more oxygen or express tiredness in turtles, this is not always the case. Sometimes, if a turtle is yawning excessively, it can be a sign that something is wrong with them.

Read down below to reveal all the reasons why turtles yawn.

Why Do Turtles Yawn?

There are many reasons why turtles yawn, including to get more oxygen, stretch their mouth muscles, and respiratory illness. I will cover each reason in detail down below.

Similar to humans, turtles will yawn in order to intake more oxygen. When a turlte opens their mouth open wide and yawns, it allows much more air to flow into their lungs. This is very beneficial, as it allows more oxygen to enter their body, and thus more oxygen reaches their blood. When turtles yawn, it also allows more carbon dioxide to leave their body. Therefore, yawning can be used as a simple technique to better assist a turtle’s breathing.

A turtle will also yawn in order to stretch their mouth muscles. It is very common for turtles to stretch parts of their body, especially their mouth and neck. This is a trait that they inherited when they lived in the wild and needed to catch their own food. It was very important that turtles had a very flexible neck and mouth, as it helped them strike quickly at their prey.

Respiratory illnesses are caused by a wide range of factors, including dirty tanks, cold water temperatures, and inadequate basking areas.

Why do turtles yawn underwater?

That being said, you do not necessarily have to panic right away if you see your turtle yawn underwater. Turtles open their mouth for many reasons when they are underwater, and you might mistake it for a yawn when really it is something else.

For example, turtles open their mouth in a very similar fashion when they drink water. Turtles also drink water frequently, so it is easy to mischaracterize this behavior.

Turtles will also appear to yawn underwater when they see you enter the room. They do this because they associate you with food, and are therefore begging you to give them food. This is a common behavior since turtles are opportunistic eaters.

Yes box turtles also yawn for the same reason as other turtles. These include

Is It Dangerous If My Turtle Yawns Too Much?

Yawning too much can be safe especially when it happens occasionally. However, if you observe that your turtle yawns too much on a regular basis, it might be an indication that your turtle is suffering from underlying health issues. These health issues are often related to the respiratory system or digestive system. You can read about this topic in my article about turtle diseases.

The key to determine if your turtle has a respiratory illness or other health issue is to look out for other symptoms. For example, you should keep an eye on how much your turtle eats. If you notice that they yawn a lot and are starting to eat less, it could be the sign of an illness.

While respiratory illness is usually not fatal for turtles, it can cause serious discomfort and pain. Therefore, if you suspect your turtle has a respiratory illness, you should give it the proper medication. If the illness persists, you might need to take them to a vet.

But do not worry!

The vast majority of the time, a turtle that yawns is completely healthy and just wants to take in more oxygen.

In most cases when a turtle yawns it is perfectly normal.

The evaluation of a veterinarian will help you properly diagnose the exact reason why your turtle yawns.

How Big do Turtles Get?

How Long Do Painted Turtles Live?

Do Turtles Get Attached To Their Owners?