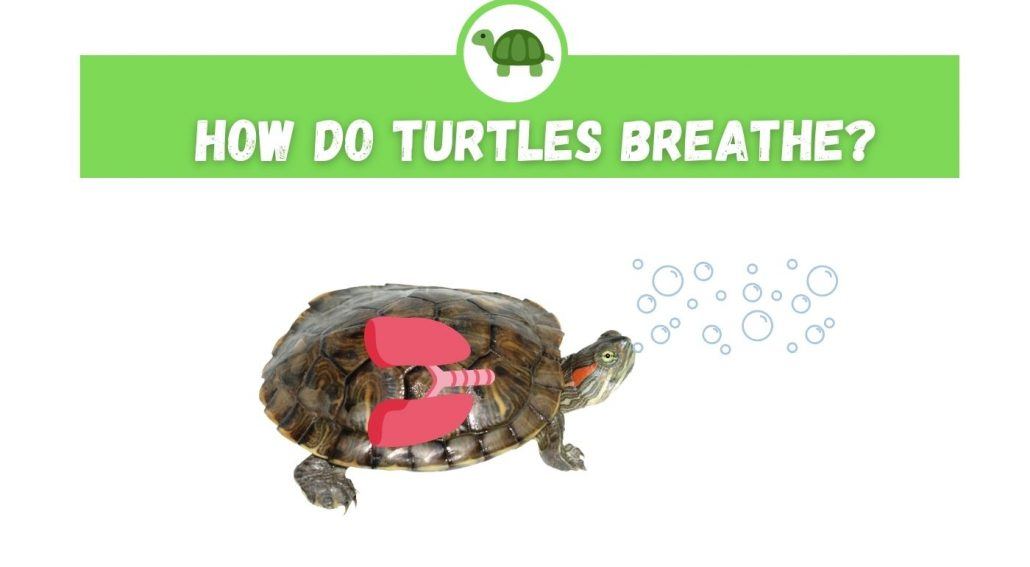 Turtles are adaptive creatures and live in the water as well as on land. They are reptiles and don’t live in water like amphibians. Sea turtles are rarely seen on land but they must come to the water surface to breathe air. Their special lung systems aren’t affected by water pressure when they dive.

How do turtles breathe?

Turtles cannot breathe underwater and need to come up to the surface to breathe air. However, these amazing reptiles can hold their breath for a long time underwater. This gives a wrong impression that they are breathing underwater.

So, if turtles cannot breathe underwater, then how do they stay alive underwater? Let’s talk about it.

How do sea turtles breathe?

Both sea turtles and freshwater turtles breathe by intaking oxygen from the air.

Turtles have lungs that are located right under the carapace and the vertebral column. They breathe through the external nares located above their mouth.

How long they can hold their breath depends mainly on the species, locality, activity level, and temperature. Let’s have a look at few aspects of turtles breathing underwater:

Can turtles breathe through their butts?

We aren’t kidding! Turtles are pretty incredible and can actually breathe through their butts. This process is technically called cloacal respiration.

Some turtles spend the winter in underwater brumation as their dormant period. Brumation is the reptile version of hibernation during winters. During brumation, the turtles shut down their bodies to conserve energy. They may not move, eat, drink, defecate for several weeks. When turtles are about to brumate, they move to the darkest and coldest part of their habitat.

During this time, these aquatic animals need a different way to breathe. When turtles brumate, they rely on stored energy and uptake oxygen from the pond water. They take the oxygen from the water by moving it across body surfaces that are flushed with blood vessels. In this way, they can get enough oxygen to support their minimal needs without using their lungs.

When turtles brumate, the source of oxygen is through their butts. Some freshwater turtles can absorb oxygen from the water through the internal walls of their cloaca or anus. The butts of turtles are especially well vascularized.

If your pet turtle is preparing to brumate, you must ensure that they are healthy, have enough body fat, and free of parasites. Also, encourage defecation by soaking them in water and rubbing their belly. Male turtles occasionally emerge from brumation before female turtles.

Turtles can drown in water if they stay or get trapped underwater for longer periods, more than they can handle. This is quite uncommon as most turtles are aware of their limits. However, even aquatic pet turtles such as red-eared sliders can drown if there is an object blocking them from leaving the water.

Just be careful when keeping baby turtles in large tanks. They may get confused with the obstacles and are at risk of getting trapped.

Well, turtles are among the world’s most incredible and ancient vertebrates. A turtle’s life remains one of nature’s great mysteries. They used to be land animals but evolved and adapted to a life of swimming.

Please let us know if you have any more questions. We would be happy to hear from you!

Baby Eastern Painted Turtle: Everything you need to know!

Do Turtles Get Attached To Their Owners?