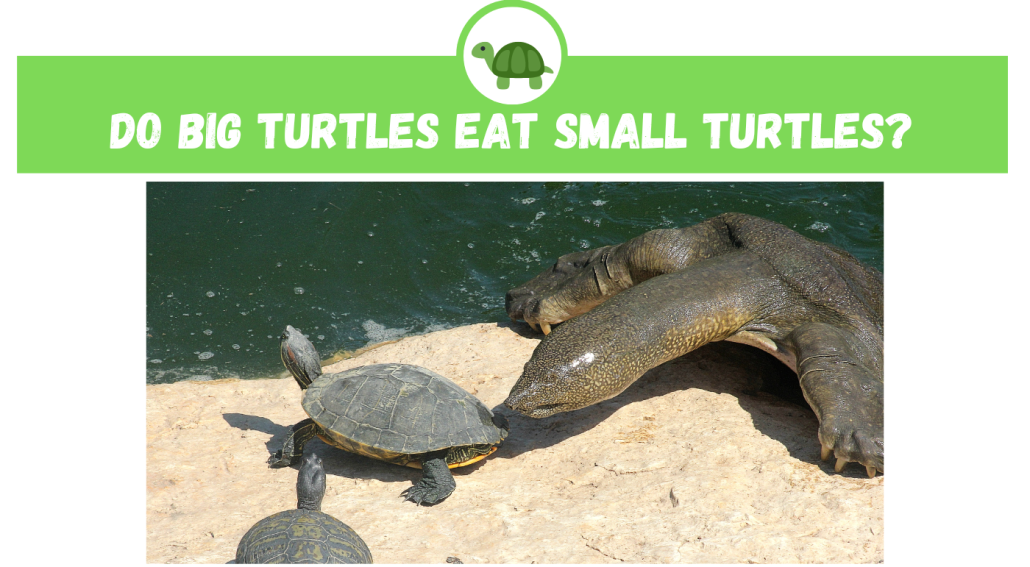 Whether you’re thinking about getting two turtles, or you are just curious, you probably want to know if big turtles eat small turtles. The answer to this question can be a bit nuanced and depends on whether the turtles are in captivity or in the wild.

In both the wild and in captivity, big turtles eating smaller turtles is extremely rare. However, that doesn’t mean it never happens!

In the wild: Most turtles are omnivores, however, the animals they eat usually consist of small worms, fish, and insects. It is very rare for cannibalism to occur. The one exception is snapping turtles. In the wild, they may sometimes eat hatchlings and tiny turtles if the opportunity presents itself. This usually only happens when the snapping turtle can’t find any other food. It can also happen if they mistake the small turtle for a different animal.

In captivity: I have never heard of a turtle in captivity eating another turtle. As long as they are appropriately fed and have enough space, baby turtles should be safe. However, as a precaution, I recommend introducing the baby turtles when they are at least 4 inches in diameter. This will help reduce the risk of any unwanted attacks.

While it is not common for turtles to eat each other, it is common for them to get aggressive. Turtles will fight with each other over food, mating, and territory.

Can you put a baby turtle in a tank with a big turtle?

Just because turtles in captivity don’t eat baby turtles, doesn’t mean it is always a good idea to add baby turtles into a tank with large turtles. There are many other issues that may occur which include:

Although the larger turtles won’t eat the baby turtle, there is still plenty of danger associated with adding the baby to the tank because of the stressors described above.

How can you add a baby turtle to a tank with an existing turtle?

Adding baby turtles to tanks with existing turtles will probably add more risks than benefits. However, if you decide to move forward after knowing the risks, I recommend adding the baby to a separate tank first. Let the hatching grow to at least 4 inches in diameter before introducing it to the adults.

A smaller 20 gallon tank should do the trick for housing the hatchling as you wait for the baby to grow.

Baby turtles can have fragile shells and an accidental nip from the added stress and food competition could potentially be deadly. If you’re turtle ever suffers an injury to their shell, you should read my guide on how to heal a turtle’s shell.

By allowing the baby to mature to an appropriate size, you significantly improve the chances of a conflict-free cohabitation.

Once the the small turtle is at least 4 inches long, you can put it in the larger tank with the bigger turtle. I recommend that you have at least 10 gallons of water for each inch of turtle.

Therefore, if you have a 8 inch turtle and a 4 inch turtle, you should ideally have a 120 gallon tank. A 100 or even a 75 gallon turtle tank might be fine at first, but once the smaller turtle grows more it will get too cramped.

If you notice the turtles getting aggressive with each other and biting, you should put them in separate tanks.

In the wild, turtles can become snacks for a wide range of predators. They often include: sharks, birds, and even some larger fish. On land, raccoons are one of the biggest predators of turtles.

The bigger the turtle, the easier they can defend themselves, however, even adult turtles can become prey to some of the larger predators.

The shell is their best hope of protection, but if a predictor can get to their head, a turtle will have a hard time defending themselves. Check out this recent video of a turtle in Australia fighting off a shark attack.

Oftentimes, the turtles aren’t as lucky! You can see from the video that the turtle does its best to shield its exposed body with their shell. One wrong move and the turtle could have easily been shark’s afternoon snack.

Can I Feed My Turtle Fish Food?

Turtle Throwing Up: Causes and Treatment

Why Does My Turtle Stare at Me?