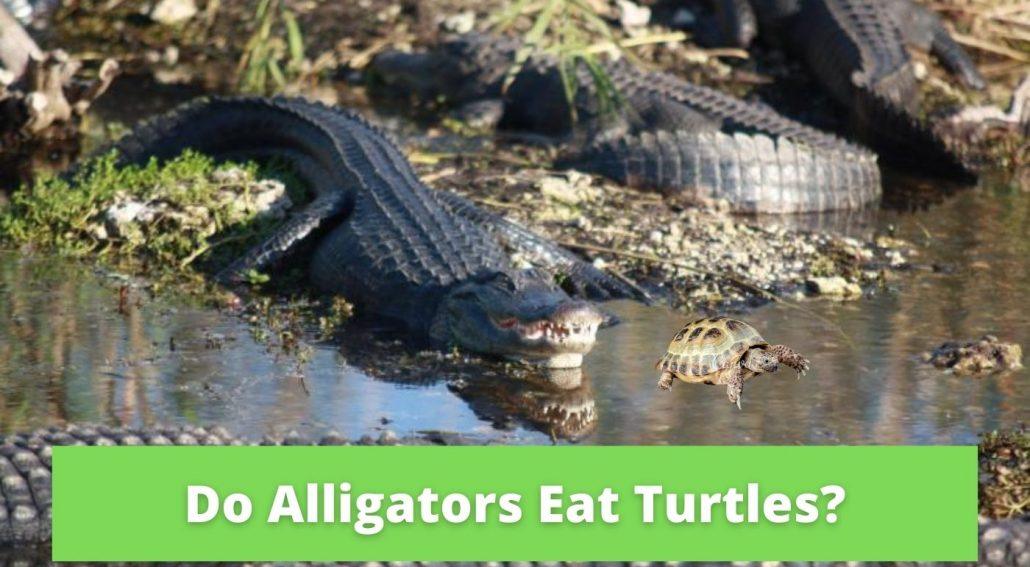 They do not necessarily go for large turtles , just turtles that are smaller and can easily fit inside their mouth.

Alligators do not usually attack turtle. The majority step into this situation when they are hungry and see an opportunity to catch an easy meal.

Alligators mostly feed on aquatic turtles that live in freshwater ponds and swamps. Turtles are a good choice of prey for a number of reasons.

While turtle shells are very hard, their shells do not protect them from hungry alligators who can easily crush them in their jaws. The jaws of an alligator can assert 300 pounds of force per square inch, which can easily tear open a turtle shell.

What animals do alligators usually eat?

An alligator will eat almost anything that gets in his way or that he can catch.

Alligators do not eat turtles as a staple diet of alligator. However, they do eat them upon occasion. The main food of the alligator is fish, which makes up 80% of their diet according to Florida’s Fish and Wildlife Research Institute. Other animals that an alligator might eat include:

Alligators mostly lie in wait for their prey to come by and then they grab it with a quick strike from their powerful jaws.

During the day, they seek shelter in ditches, marshes or mud banks where prey are more likely to appear. As cold-blooded animals, they can survive without food for months as long as they do not expend too much energy.

It is important to note that young, juvenile alligators usually don’t eat turtles because their jaws are not strong enough yet.

What other animals eat turtles in the wild?

Other animals that eat turtles in the wild include large fish, snakes, racoons, and even large birds.

Racoons can cause a problem for freshwater turtles since they are able to climb into small spaces and steal turtle eggs from nests along the banks of rivers. Snakes will also eat turtle eggs along the shores of lakes and ponds where turtle nests are located.

Large birds such as vultures will prey on young turtles once they hatch from their eggs. There have even been reports of vultures eating adult sea turtles if they come near coastal waters. There are also some hawks and falcons (and owls), which can swoop down and grab turtles off the ground.

Sometimes, large birds will pick up a turtle and drop it from the air in an attempt to break the shell.

How do turtles escape prey predators?

Turtles have adapted to threats of predators in a variety of different ways. A turtle will retreat into its shell as a means of protection if it is attacked, and some predators will not be able to break their shell.

Turtles sometimes use their speed and size to escape predators. Turtles like the diamondback terrapin (Malaclemys terrapin) swim by rapidly paddling and kicking with their webbed feet to outpace a predator, such as a raccoon.

When turtles can’t run away fast enough, they rely on other ways to protect themselves. The common musk turtle protects itself by biting its attacker. The loggerhead sea turtle releases pheromones that are very unpleasant for predators to smell, which sends the message “stay away!”

Some turtles, like the snapping turtle (Chelydra serpentina) fight back when attacked. Turtles might bite their predator’s leg or arm and then get away while the animal is distracted by pain from the bite.

Many turtles escape predators by going underwater. This means they can hide from a predator in a nearby pond until the threat is gone.

Since turtle eggs are vulnerable to predators, female turtles lay their eggs at night, deep within sandy nests. When the baby turtles hatch, they are programmed to walk towards the brightest direction in the sky, which is towards the sun. This adaptation works well because it ensures that they go away from their nest and any potential predators (and also ensures that they do not end up walking in circles).