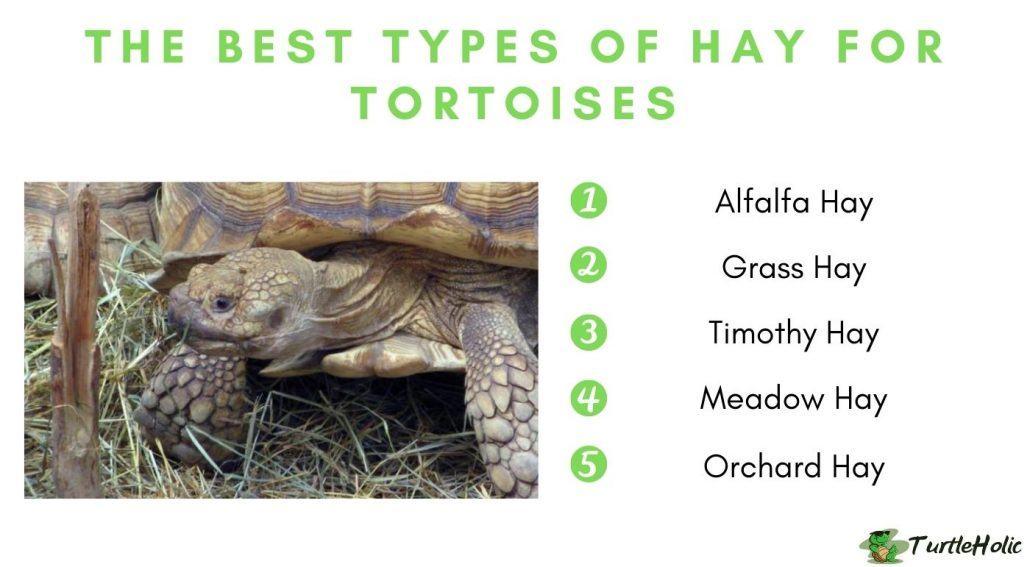 Is Hay Healthy for Tortoises?

Tortoises benefit greatly from a diet high in foraging material, such as hay. This is far superior to fruits and vegetables, and much cheaper.

Some well-known tortoise keepers recommend a diet for grassland species that contains up to 85 percent high-fiber foraging feed such as alfalfa hay, timothy hay, meadow hay, and various other grasses, with only a small portion of the diet consisting of fresh produce such as vegetables and fruits.

It is necessary to know the differences between the various types of hay available and to provide an ideal mix of hays and leafy greens for your tortoise. This article will go over the best types of hay for tortoises. Continue reading to find out more!

Alfalfa is the most widely available and popular type of hay. It is high in protein, energy, vitamins, and minerals. It is also very digestible.

Alfalfa hay also has more cell solubles, less cellulose, higher protein, and lower fiber than grass hays. Because it has a high-protein and low-fiber content, alfalfa hay is best fed in conjunction with other, higher-fiber hays.

Alfalfa is preferred over other types of hay because it is highly palatable. However, overfeeding grassland tortoises a high-protein diet can result in tortoise shell pyramiding. It is important to remember that alfalfa hay has to be fed in moderation. Alfalfa hay should not comprise of more than 50% of a tortoise’s diet.

Tortoises spend most of their day foraging for food in the wild, frequently eating throughout the day. Including grass hays as a major component of the diet mimics this constant foraging and provides enrichment to tortoises in the form of something to do during the day.

The high-fiber content of grass hays also promotes healthy digestion and solid, normal stools, which are indicators of overall health.

Timothy hay is a common type of hay. It has high fiber content and a calcium-to-phosphorus ratio that is balanced. Timothy hay contains about 8% protein, which is considered moderate for hay.

The main disadvantage of feeding timothy hay to tortoises is that it contains a lot of stems. Some tortoises enjoy the hard, crunchy pieces, while others prefer the softer hay.

Meadow hay is made up of various naturally occurring grass hays, such as ryegrass, fescue, and orchard grass. It offers an enticing blend of textures, fragrances, and flavors. It is typically sweet and nutrient-dense, with high fiber and low to moderate protein content. The protein content of meadow grass hay is typically between 6% and 10%.

Orchard Hay is great for a tortoise that is growing or needs to gain weight. It is one of the best grasses for leopard tortoises.

Oat hay is a different variety of hay made from an oat crop that is not harvested for grain. It is commonly used to supplement other hays because it lacks the higher nutrient density of higher quality hays. Because oat hay is low in calcium and frequently high in nitrates, it is not suitable for tortoises in large quantities.

While oat hay is great for adding variety to the diet, it should not be used as a primary food source. I personally would only feed oat hay temporarily if it is the only hay available.

Although not all tortoises will accept hay, you can “train” them to eat it by including it in their daily diet. Cut the hay into small pieces to make it more difficult to pick out. The more they become accustomed to seeing it and consuming pieces here and there, the more likely they are to begin eating it.

Even in the cooler months, your tortoise should eat various foods such as grass, weeds, and greens. Try out different types of hay on your tortoises – don’t confine it to a single type. Just because your tortoise refuses one type of hay doesn’t mean it won’t eat another.

Some final tips, when selecting hay for your tortoise, look for one that is high in fiber and low in protein. In general, the greener the hay, the more chlorophyll it contains, which means it contains more vitamins and minerals. Older, browner hay has more fiber but less nutritional value.

When selecting hay, look for one that has a sweet, fresh scent. You don’t want to give out dusty or moldy hay.

How to Make the Best Red-Footed Tortoise Enclosure

Mold in Tortoise Enclosure: What to do?