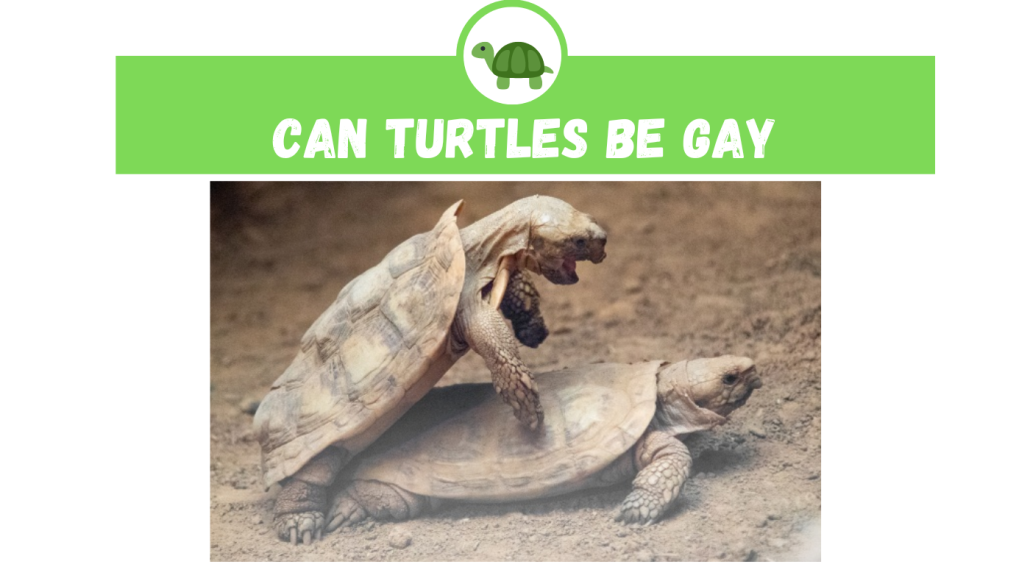 Turtles are reptiles that reproduce by having intercourse, and the females lay eggs a couple weeks after. However, you might be wondering if turtles can be gay. This article will explain everything you need to know.

Can turtles be gay?

The answers is a bit tricky. Yes, male turtles have been known to exhibit same-sex attraction, but this is usually when there aren’t females around.

There have been many studies that have looked into whether turtles can be gay. While there is not much evidence of females exhibiting homosexual behaviors, male turtles have been observed participating in gay acts.

Almost all of the cases have occurred in turtle populations that consist of mostly males. Most of the time, these acts consist of one male turtle mounting another.

Since there are not enough females to go around, the male turtles will sometimes match up with each other.

That being said, these turtles are not exclusively gay, as they would still participate in intercourse with a female if they had an opportunity.

While it might sound crazy, sometimes a turtle might not be able to distinguish the difference between the shell of a male or female. Therefore, they might just mount the back of any turtle that they see.

One study that observed male turtle mounting each other also found that the male turtles would mount stones that resembled a shell. In some cases, the male turtle would even mount dead turtle carcasses.

Mounting behavior significantly increased during the breeding months of May through September.

Lastly, it is important to note that mounting is not solely a gay behavior. In many turtle communities, mounting is seen as a form of dominance.

Therefore, larger, and stronger turtles will mount on smaller turtles to show dominance, not to mate. Other forms of dominance include biting and scratching.

There have also been studies that researched turtle sexual preferences in captivity. When there was a female mate available in the same tank, the male turtle would choose her over another male turtle.

However, male turtles that were kept together without females were observed to engage in mounting. That should be taken with a grain of salt, as these turtles were not living in their natural habitats.

Is it bad to keep two male turtles together?

It is totally fine if you want to keep two male turtles together. It is just important that you have a large enough tank. You should have 10 gallons of water for each inch of turtle shell.

For example, if you have two 5-inch turtles, I recommend that you have a tank that is at least 100 gallons. Male turtles will need plenty of space so that they don’t get territorial.

If you do witness one of your turtles mounting the other, I suggest you intervene. There is a good chance that the turtle on top is being aggressive, which can cause stress for the other turtle.

I also suggest that you add some plants or other decorations to give your turtles the opportunity to hide from each other.

Lastly, you should make sure that you have a powerful filter to keep your tank clean. A dirty tank can cause stress for your turtles, which in turn can cause them to be aggressive to one another. You might need to get separate tanks if you notice that your turtles are constantly biting each other.

When it comes to whether or not turtles can be gay, it is not a clear yes or no. While turtles (mostly males) have been observed to mount each other, it is usually because there are not other female turtles around.

In a habitat where there are equal number males and females, there is not a lot of evidence that shows males will have sexual relations with each other.

Where Can I Buy a Diamondback Terrapin?

Which Turtle has an Orange Belly?