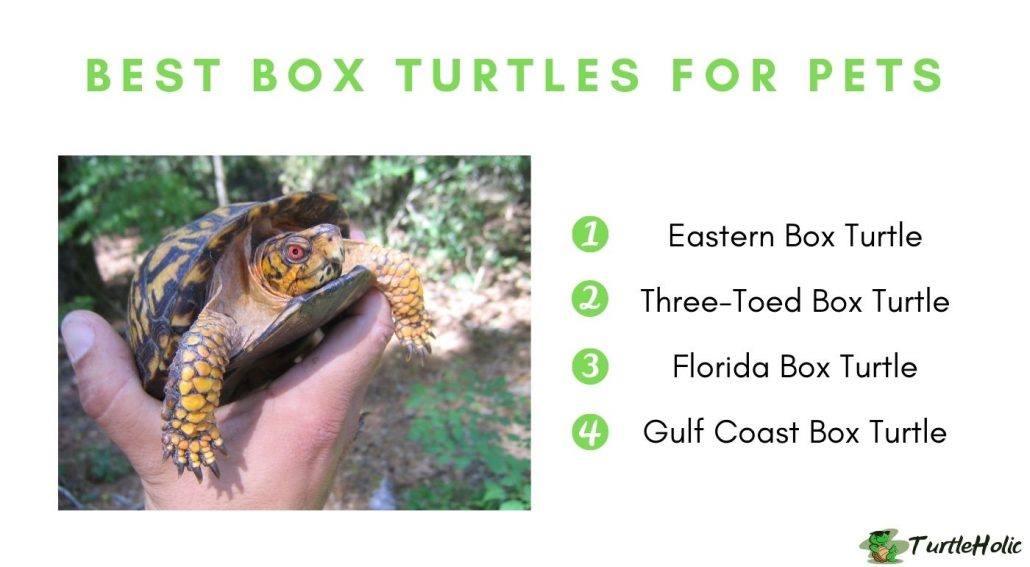 It can be a big commitment when you decide to get a pet turtle. However, turtles make excellent pets and compared to other pets they usually don’t require as much work. There are several subspecies of turtles, each with its own requirements. One of the most common type of pet turtles is the box turtle. This article will cover the best types of box turtles for pets.

Before I give you a list of all the recommended box turtles, let me first explain why box turtles are an excellent choise for a pet.

Yes, box turtles are very good pets. They are easy to handle, low maintenance, good size and are a very harmless species.

Box turtles prefer solitude, but that doesn’t mean they’re not sociable. They can actually be very playful and friendly. Box turtles are small and easy to handle, and they eat a simple diet.

One of the most time consuming aspects of owning a turtle is keeping the water in the tank clean. Since box turtles don’t usually swim, you don’t need a lot of water in your tank. That being said, you should still have a small pool of water that your box turtle can soak in when it gets hot.

Box turtles are not as long as most other turtles and tortoises. A box turtle can grow up to 6 feet long in 4 to 6 years. Its typical length ranges from 4 to 8 inches, with slightly larger female subspecies than male subspecies. While bigger turtles like red-eared sliders are cool, they require much bigger tanks.

Several reptiles carry Salmonella germs, but the box turtle is not one of them. They can, however, be asymptomatic carriers. You don’t need to be concerned that box turtles are dangerous because they can spread germs. But, to be safe, remember to wash your hands after touching a box turtle.

Eastern box turtles are inexpensive and simple to maintain. In my opinion, eastern box turtles have the prettiest shells. It has a dark brown carapace patterned with numerous splotches ranging from yellow to red, making it a popular beginner’s pet. The plastron could be a single color or tan and black.

Eastern box turtles range in length from 4.5 to 6 inches. They prefer a humid woodland setting and can live for 40 to 100 years.

This type of box turtle prefers environments with plenty of humidity, hiding places, and food sources. From Arkansas to Kansas and from western Georgia to northwest Texas, these subspecies can be found throughout the Central and Southern United States. It has a lifespan of about 20 to 30 years. They can, however, live for 50 years or longer if properly cared for.

A florida box turtle can reach a maximum size of 4 to 6 inches. It features a golden starburst design on its dark brown carapace. It has the appearance of a sophisticated box turtle. Damp woodlands, swamps, and marshes are ideal habitats for this species. A Florida box turtle can live for up to 50 years if properly cared for.

When they are young, Florida Box turtles like to live in tanks/terrariums that have a lot of leaf covers. Therefore, I definitely recommend adding some live plants to its habitat.

Ornate box turtle as a pet

Ornate box turtles are also a great option for a pet turtle. While they are beautiful creatures, I usually don’t recommend them to first time turtle owners since they require a little more work. This is mainly because it is best to keep them in outdoor enclosures versus indoors. Since they are good climbers, it is important that you have a high outdoor enclosure that they can’t climb.

What do you feed a pet box turtle?

When caring for a box turtle, we should be familiar with its diet. Captive box turtles can be fed a diet of 50 percent mixed fresh vegetables with some fruit and 50 percent low-fat protein, such as commercial turtle pellets. Earthworms, mealworms, beetles, grubs, crickets, slugs, and snails are also excellent protein sources.

You should now have a better understanding of how to care for different varieties of Box Turtles after reading this article. Are you ready to go on this exciting journey with a brand-new box turtle?

How Big Do Box Turtles Get?

How To Take Care Of A Baby Box Turtle?

How Fast do Turtles Walk?