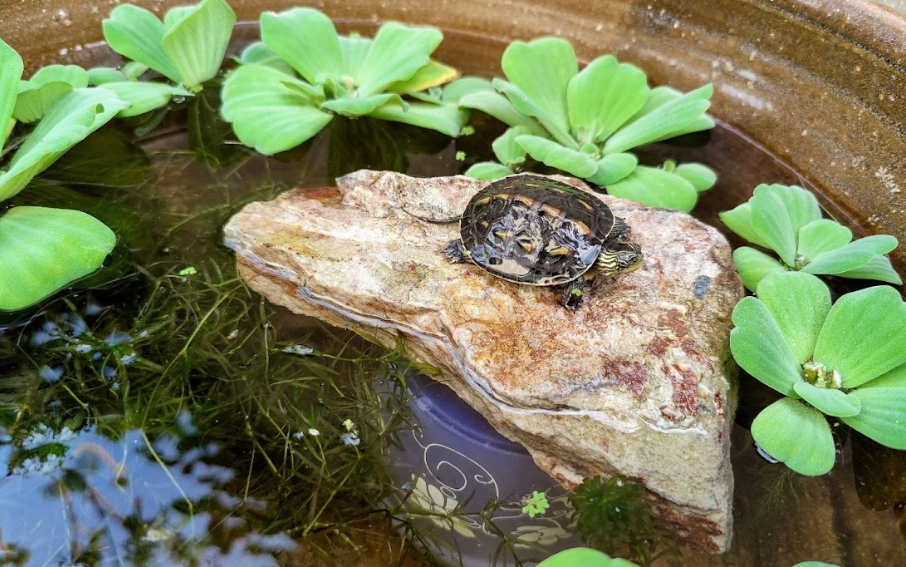 I have 11 aquatic turtles of various species which are housed in large rubber concrete mixing tubs outdoors. I live in Thailand so the weather is warm and humid and they can live quite naturally. Each tub has a filter, aquatic plants and small guppies to control mosquitos.

I have several rescue turtles. Some have missing limbs, some had injuries from dogs or cars. I also have had some in the past with respiratory infections which were all successfully treated.

I have a group of 5 Chinese golden thread turtles which hatched out from eggs one of my females laid.

You may be interested to know that here was a huge problem with capturing turtles from the wild to sell in the markets for food and releasing them at Buddhist temple ponds for making ‘merit’. It was illegal but no one enforced the laws. The turtles were crammed together and kept in very poor conditions.

Many of them were very sick, dehydrated and injured, and would die when released into unsuitable places with dirty water and no snails to eat.

Only this last couple of years it seems to have finally stopped. I don’t see turtles on the markets now.

It was usually the snail eating turtle offered as it’s the most common. But sometimes mixed in with them would be very rare turtle species. I would buy these, treat them for their diseases and get them strong again before releasing them back to the wild.

Sadly it got more and more difficult to find safe place to free them. Now there are no places near my home that are safe as housing developments and roads have ruined their habitat. So I am glad that there are no more on the market as I have no idea where I could set them free.

I used to see many wild ones crossing our village roads at night in the rainy season years ago. These days I never see them. It’s very depressing what humans are doing to the environment and animals.