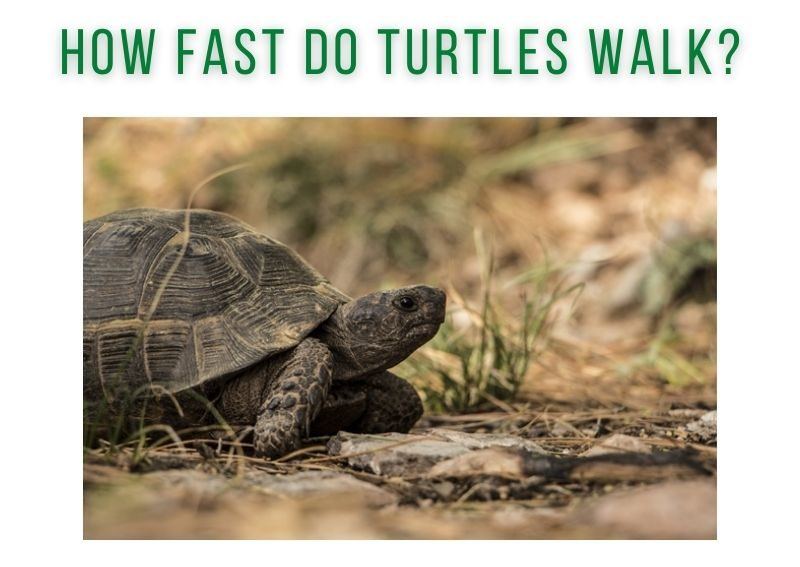 If kindergarten taught us anything, then it’s the fact that turtles are slower than slow. In fact, these poor animals are often mocked due to their slow speed. But still, one might wonder if are turtles really that slow and how fast they can really walk? Well, we are here to answer your questions.

How Fast do Turtles Walk?

Different breeds of turtles can walk at different speeds, but the fastest turtle can walk at around 3 miles per hour on land.

The exact speed of a turtle is dependent on a wide range of factors, including land, age, flexibility, shell shape, and more.

How fast is each species of turtle?

Below is a brief list of some popular turtle species and the average speed at which the said breed can walk.

One of the fastest turtles, wood turtles, has been recorded to clock at speeds of more than 1 mile per hour. They are even faster in water, where they can hit speeds of around 10 miles per hour. Wood turtles are native to the USA’s north-eastern states and can also be found in Michigan, Virginia, and Nova Scotia. Wood turtles can generally live for up to 40 years of age in the wild, which can increase up to 57 years while in captivity. These turtles prefer to spend extreme cold while hibernating and hot summers in estivation.

Musk Turtles are generally highly aquatic, although they can be observed snoozing in leaves and wood debris along the shoreline. Diet-wise all musk turtles are carnivorous in nature and survive by eating various invertebrates and small fishes. These Turtles tend to have a domed carapace with a distinctive kneel down the center of it. When fully mature, musk turtles can be 3.1 to 5.5 inches in length, while female turtles are slightly larger. These turtles are generally at risk of being attacked by other predators due to their small size, and therefore they should only be kept in specialized aquariums while in captivity. Musk turtles can walk at speeds of 0.2 miles per hour.

Pseudemys is a group of large freshwater turtles that are herbivorous in their mode of nutrition. These turtles are found in Eastern portions of the United States and North-eastern Mexico. They are commonly referred to as Cooters, derived from the word Kuta of Bambara language, signifying the fact that this breed was brought to the states by African slaves.

The genus Pseudemys constitutes seven species. The member of this genus can attain a length of 16 inches and a weight of 35 pounds. Cooters are aquatic turtles and depend on water for their prey and for finding mates to breed with. However, they can also be observed basking in the sunlight on rocks along the shoreline. These turtles can walk at a speed of 0.20 miles per hour.

The most common type of turtles that are kept as pets. Box turtles are comparatively slower than most other turtles and are documented to walk at speeds of 0.25 miles per hour. One of the main reasons box turtles are so slow is because of the large size of their shell. It restricts the flexibility of their legs, and also requires more weight to be pulled along.

Box turtles are omnivores and, therefore, can sustain themselves on a variety of diets. These turtles are mostly located in the southern states of the USA and southeastern portions of Mexico.